Gabonese teachers are going on strike for three days. The decision was taken at the end of a general assembly of the Convention of Education Unions (Conasysed) held in Libreville on Saturday 9 January. After three hours of debate, the start of the strike was voted by a show of hands.

On 8 December, a strike notice was filed by Conasysed. One month later, it believes that the government has not responded to the demands. Hence the decision to go on strike from Monday 11 January 2021 throughout the country.

Gabonese teachers more than determined to fill out personal cards

Despite the ban on gatherings of more than 30 people, Gabonese teachers responded in large numbers to the call of their union. According to RFI, Conasysed invited each Gabonese teacher to prove that he or she has personal demands and to register them on a list that will be sent to the government on 20 January. Olga Assa was taken in by this approach.
« I am in the same rank as the one I came in with. Nothing has changed, my salary has not moved for 18 years, » he said.

The government is not concerned about the education sector

For the moment, the Gabonese government has not given its version. But according to Louis Patrick Mombo, general delegate of conasysed, the teachers’ demands are legitimate. Because the problems of the education system do not seem to be a priority for the government.

Since 2014, recruitment, advancement and reclassification have been suspended. The union is also demanding the construction of classrooms. « The government does not provide concrete solutions to the concerns of Gabonese teachers: recruitment, integration, tenure, automatic advancement, post-stage reclassification, recall allowances, salaries…. « . This was stated by Louis Patrick Mombo, General Delegate of Conasysed. 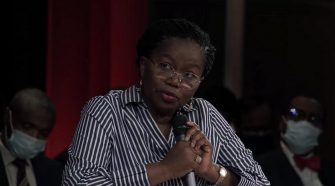